GoldStar-24 (GS-24™) is a computerized instrument developed for the quick testing and accurate determination of gold karat values. It is programmed to test values of yellow, white, red and green gold ranging from 5 karats to 24 karats. It tests and determines gold plated, gold-filled materials and base metals and defines them as "NOT GOLD". In addition to the different types of gold, GoldStar-24™ also tests and identifies objects made of Platinum and Palladium.

The Gold Star-24™ digital unit is a computerized controller that utilizes a newly patented, ST proprietary electrochemical method to obtain an analog signal and convert it to a digital. The unit then processes the converted signal and the final results are displayed on an alphanumeric LCD in both, American and European Standards.

Note: When using AC / DC converter, the power switch must be in Off position.

Chart of Gold Values as Displayed by the GS-24 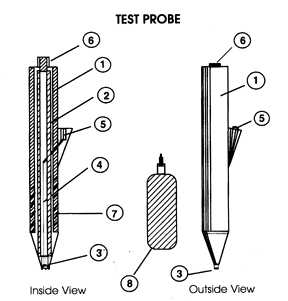 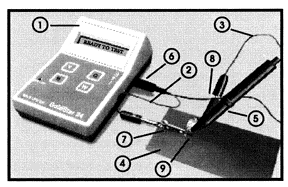 The test is now successfully completed Note: Buttons (#2 in the above photo) are “Y” for yellow gold, “R” for red or pink gold, “W” for white gold and “G” for green gold.Note: Platinum sensor tip is placed on the testing point before it has been filled with electrolyte. or, it testing point has not been thoroughly cleaned with a red eraser or if the air bubbles have formed in the electrolyte drop. the alpha numeric LCD will display a "NO CONTACT" sign. Before further tests are attempted please repeat steps 7 through

Testing Gold Plated Articles: The sophisticated electronic design of the Gold Star-24™ and its state-of-the-art microprocessor allows the instrument to accurately distinguish the difference between gold-plated, gold-filled and solid gold materials. Electrolyte used by Gold Star-24™ in the gold testing process. Penetrates thickness of the material during the test to an approximate depth of 2.5 microns. As a rule, the correct results are usually achieved the first time (subject to a proper and thorough cleaning of the testing point with a red eraser.)

If there are any doubts about the material that you are testing, or if you suspect that the gold plated or the gold filled layer on the article is thicker than 2.5 microns, or to ensure that the results are correct, carefully sand testing point with a fine file so that the electrolyte penetrates the layer. Repeat testing procedure, steps 7 through 10 (12 steps). If the tested material is gold plated or gold filled the Gold Star-24 will identify it as NOT GOLD. Testing Articles Larger than the Alligator Clip: When testing articles larger than the alligator clip, remove red wire plug from the alligator clip, and while holding it down. firmly press the plugs metal tip against the eraser cleaned testing point, making an electrical contact. Proceed with the test by repeating steps 7 through

Note: If testing the same sample many times after several tests, wash the sample with water to remove old electrolyte.
Policies
About Us
Ordering & Terms
Contact Us
Talk To Us
Call us at 1-800-295-6320
Need Assistance?
Send us a message!
The I. Shor Co. and I. Shor Canada are registered trademarks of Shor International Corp.
© 2022 Shor International Corporation & The I. Shor Company. All rights reserved.